My vacation in Japan started out on the rough side, before I ever stepped into LAX. But travel is what you make of it, and we made this trip one for the books.

A friend asked me a while ago about layovers; specifically, she wanted to know if long layovers or short were better during international trips. She couldn’t see my body language over Messenger, but I shrugged. “Your attitude determines most of it.” I stand by that. If you have a seven-hour layover in Beijing, where your only options are KFC, Pizza Hut, Starbucks, Costa Coffee, three light-fare restaurants, and one proper sit-down restaurant, and then a smattering of high-end shopping and duty-free liquor and cigarettes stores… you deal.

I’m currently dealing. I laid down for a bit, read for a bit, walked around for a bit. Now I’m doing this through an app on my phone. Facebook, Instagram, Twitter, and anything Google aren’t working on the free airport wifi. But WordPress is. 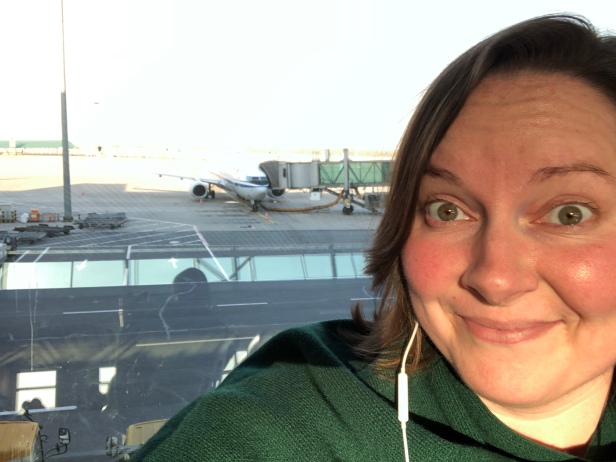 This poncho (authentic from Mexico!) might be the best travel accessory I own. Folds into my backpack easily, rolls into a pillow, serves as a blanket or light jacket, and I don’t look like I just rolled out of bed. At least, I don’t think I do.

We spent this past week exploring parts of Japan: Tokyo, the Mt. Fuji area, Kyoto, and Hiroshima. I didn’t expect to like Japan as much as I do. I visited Kyoto for a quick weekend while I was still living in Taiwan, and enjoyed my few hours there back then, but that trip was for a boy. He and I are still friends, but any trip inspired by fleeting and volatile emotions is going to leave a very specific taste in your mouth.

Previously, when I thought of Kyoto (and Japan), I thought of disappointment. Of a relationship that was never meant to be. Of how the majority of my life has been spent as a single woman.

Now when I think of Japan, I think of the fun I had with Doug and Sabrina. Dozens of miles by foot, hundreds of miles on trains and trams and buses and in subway cars and shuttles. A couple hundred photos taken, a giant volcano seen.

Many, many inside jokes. Most of them stupid. But man, we had a great time.

I’ve started to worry that working remotely is spoiling vacations for me. I want to be in new places longer, and I’m spoiled by my longer trips in which exploring is a slow-going and in-depth affair. I would love to get to know Japan better, especially considering its history.

I’m also reconsidering who I am as a photographer after this week. Maybe it’s because Asia isn’t new to me anymore, or maybe it’s because I just want to exist as a traveler sometimes, not a photographer. It’s at least partly likely because of the hordes of Instagram photographers and other self-proclaimed important photo-takers who seemed to lack any joy over where they were or what they were doing. Japan was full of them. They frustrated me to such an extent that I took far fewer photos than I expected. Enjoy your photo of a small cup of coffee you didn’t actually enjoy drinking, Miss Influencer. Hope your followers understand how joyless you looked for the 30 minutes it took you to get the exact right shot. Or took your boyfriend, rather, who then spent his own time in front of the camera with his own small cup.

I’m also finding that I want to take more portraits, like street photography, but that’s such an invasive thing to do in the age of the internet. It’s one thing for Humans of New York to do it and share the depth of the person in front of the camera. It’s another thing to post a picture of a stranger without their permission. I just… I don’t know how I feel about it. About a lot of aspects of photography. 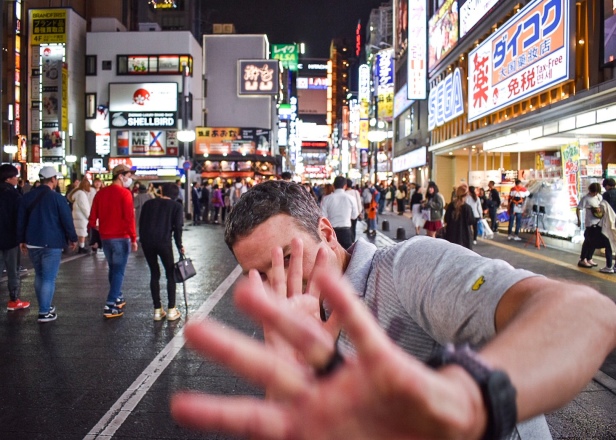 (He thought he was ruining my shot. But this may be one of my favorite photos from the week.)

But this photographic reckoning is actually a good thing. It’s honing my skills, I think, and helping me feel less like I need to have my camera on me at all times. I can walk down a street, see the details photography taught me to find, and then just enjoy them instead of worrying about getting the shot.

It’s also a good thing because it means I’m probably ready for my goal trip to Paris: just me. No camera. Maybe one photo per day from a Polaroid or something. I may take a social hiatus again while I’m there. Go view the City of Love (or is it the City of Light?) as a solo woman trying to see beyond the honeymoon destination.

The solo woman. Alone, but lonely only sometimes. I have yet to meet a man who can keep up with me and who wants the same things out of life that I do. So I go. Sometimes with my travel buddies, who are precious to me.

But no matter what, I go.

It’s starting to get colder in the terminal. I just realized that my phone and watch didn’t adjust to Beijing being an hour behind Japan, so I still have 4.5 hours until my flight takes off. They haven’t even assigned a gate yet for my flight.

So I’ll continue sitting here. Between gates E23 and E25. People are lining up to board E23. I wonder where they’re going. I think they’re Chinese. It’s a Japan Airlines flight.

One thing I really enjoyed about Japan was the fashion. Both Sabrina and I did. We’d spot a particularly well-dressed man or woman and quietly discuss why their outfit worked so well. For the most part, people dress conservatively there, but not in a drab way. They’re tailored, clean, and stylish. Elegant. Timeless looks and dress pants that hit the top of a polished shoe just right.

I don’t dress that well. I’d like to. The poncho helps a little.

(When Sabrina and I weren’t able to sit next to each other and talk, we’d text over wifi.)

The sunset here is really muted because of the smog. And it’s Saturday, so I think the pollution levels are lower than on weekdays.

It’s a good thing none of the shops here sell snacks. I’d be elbow-deep in Hi-Chew wrappers by now.

Wait. My flight takes off at 9pm. I have almost five hours left. After rambling this long, I guess it’s time to read. Or, more likely, watch Netflix.

6 thoughts on “Japan again, but really for the first time”