On the drive to our first destination, Bipin shared snippets of history about Nepal. We all sat in the van, separated into our groups, and listened intently to the story of the royal massacre.

In June 2001, the heir to the Nepalese throne, Prince Dipendra, shot his family members in a drunken rage: his victims included his father, King Birendra. Ten people, including Prince Dipendra, ended up dying, though the official story, and Prince Dipendra’s involvement, is considered controversial.

Over the next few years the nation was fraught with political strife. It descended into chaos, with protests, bombings, necessary peace talks, and the eventual abolition of the monarchy. As recently as September of last year, three months before we sat in the van listening to Bipin, there were protests over the new constitution.

Additionally, beginning in September, a major fuel blockade has severely crippled Nepal. According to some sources, the blockade is India’s way of forcing Nepal to make changes to its new constitution. Others say it’s because of members of lower castes in Nepal.

No matter the cause, Nepal relies on fuel from India. Previously, around 300 fuel trucks would travel from India to Nepal each day. When we were there, 5-10 fuel trucks were making the trip. And as our group traveled from one location to another, we saw long lines of cars, trucks, and commercial vehicles waiting for gas.

As the road widened from claustrophobic alleys near the Kathmandu Guest House to wider, manageable streets, we alternated between looking at Bipin as he taught us and catching glimpses of Kathmandu life out the windows.

We passed a tall fence with yellow signs affixed to it. “World Heritage Site” said one. “Pashupati Area Development Trust” was on the other. I was surprised when we turned in.

(Again, I wouldn’t have been surprised if I’d read the Trip Notes from Intrepid once more before arriving.)

Megh parked the van, we got out, and I immediately felt like a tourist. As a group of foreigners, we were watched by locals as we slowly walked into the open area of the heritage site. Our large cameras were another giveaway, but I shook off the feeling and started taking pictures of everything I wanted to remember: the nearly dry riverbed, the piles of trash, and the small bonfires burning across the bank from us. Ahead was a complex with a temple. Bipin called us into a circle. 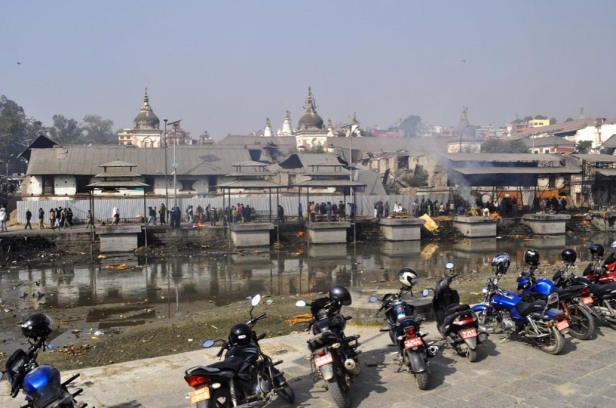 We were at Pashupatinath Temple, a Hindu site dedicated to the god Shiva, and the Bagmati River in front of it would eventually join the Ganges. Elderly men and women from across Nepal and India go to Pashupatinath to die, then be cremated along the river.

The small bonfires I’d noticed were cremations. At this realization, I quickly let my camera fall against my chest. Bipin had asked us earlier to respect the dead and their families and refrain from taking pictures of bodies being cremated.

They were wrapped, and the only indication they were the dead was the crying family surrounding the pyre. But the sight jarred me. And the wails from grieving family members got to me.

We continued along the bank, learning more about the site. At one point, across from the main part of the temple, Bipin gave us some time to wander around and take in the area. My first thought was that I needed to just sit.

I needed to respect what was unfolding across the river. And I needed to let my mind settle after being shocked by the cremations. The shock came from a sudden awareness of my own mortality, and from the sadness emanating from the families.

A while later we all congregated to learn more about the Hindu god Shiva and the significance of the small buildings around us.

Bipin gave us ample time to look around, take pictures, and ask questions.

We headed farther up the hill, where there were benches and a good vantage point for the proceedings on the river’s banks and at the temple. We saw some tourists taking video of the cremations.

(“Hey guys! Want to see my awesome vacation video of a buncha people wailing and mourning and cremating their loved ones?” Come on, tourists. Have some respect.)

We continued up the hill. We foreigners spread out and slowly made our way up the stairs, and Bipin bounded up and down the stairs to answer questions from those farther ahead and those down below.

The Nepalese could probably give Kenyans some stiff competition in marathons. 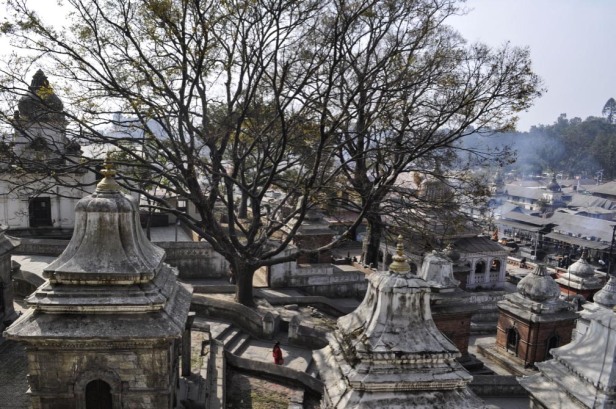 Over the top of the hill, after passing more religious pagodas and small temples, we met some monkeys, got a great view of more of Kathmandu, and then started down the hill toward the waiting van. Megh had driven to the other side of the site to pick us up.

Our next destination was Boudhanath Stupa, a Buddhist site. The stupa is large and surrounded by connected, multi-storied buildings.

It’s being rebuilt, as the earthquakes caused quite a bit of damage, especially to the top.

Near the entrance Bipin corralled us for a while to tell us about Boudhanath and its significance, then told us to meet him after we’d had a chance to walk around the stupa. 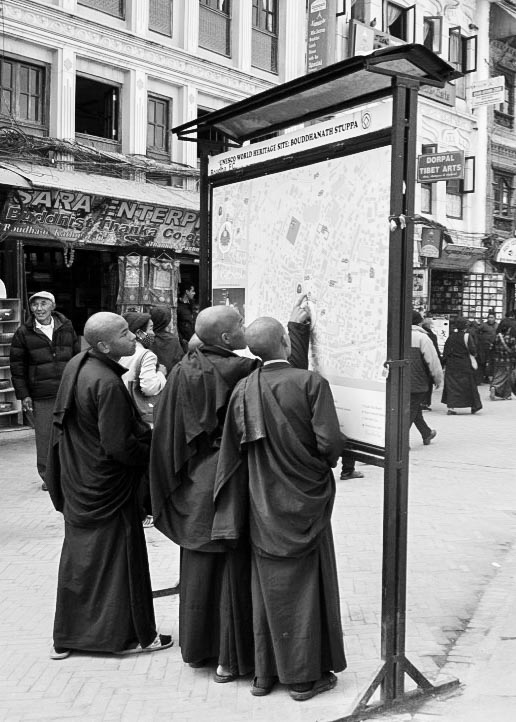 We all circled the base, then joined Bipin at the Buddhist Thanka Centre: School of Thanka Painting. There we learned about mandalas: their history, the art of painting them, and how they relate to Buddhism.

Mandalas are stacked geometric designs that represent the universe. Boudhanath itself, from above, is a mandala. Most, if not all stupas, are built as mandalas. Traditionally, mandalas are meant to be created, either with paint or sand, with dedication and many hours (thousands, and years if you include all the training) spent in their creation.

However, the purpose of a mandala is to represent that nothing is permanent, and once it has been completed, it’s supposed to be destroyed.

It’s a metaphor for life. And the metaphor, just like the mandalas, is beautiful.

Lunch was on the roof of the restaurant next door to the centre, and several of us enjoyed our first taste of mo mo, the Nepalese version of dumplings. This was our first chance to sit as a group and get to know each other a little better, and Sylvie and I had everyone convinced we’d been friends before the trip because our humor was so similar. During lunch we were entertained by a Buddhist prayer, punctuated by sighs and the speaker clearing his throat, recited over loudspeakers at the stupa.

I asked Bipin if I could return to the centre after lunch so I could buy a mandala. Wendy, Joel, and I went together and talked for a long time with the staff there, and Wendy and I both bought beautiful mandalas, with the proceeds going directly to the school.

The others were waiting downstairs when we finished, and we got back into the van. Our afternoon was free, and once we returned to the Kathmandu Guest House, each group went off on their own adventure.

Sylvie and I quickly agreed that we wanted to walk around the area, and we ended up threading through alleys, roads, and dead-ends as we explored.

Until dusk we were lost, enjoying getting to know the area and people watching. 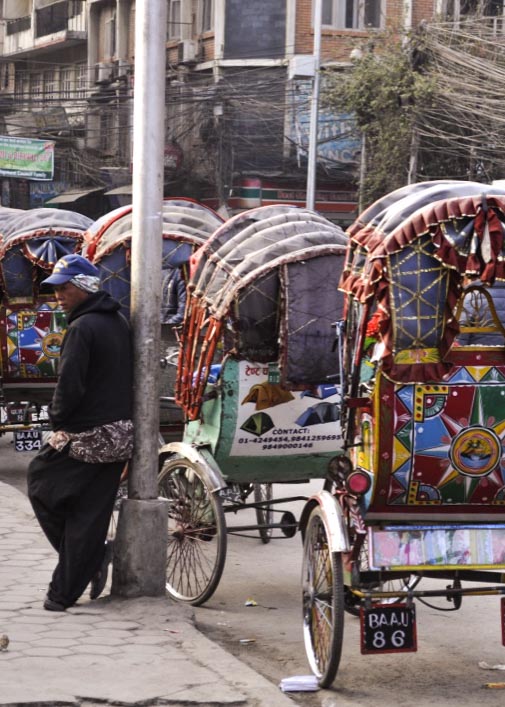 “Do we know where we are?” I asked Sylvie.

“Does it matter?” She shrugged and continued walking.

That was the beauty of the afternoon, and of the trip. We were safe and free to get to know Nepal on our own terms. The majority of us were comfortable travelers — respectful of the culture, willing to go outside our comfort zones, and flexible.

Over dinner at a restaurant next to the guest house, Sylvie and I got to know each other. I had chicken tikka masala, we shared garlic naan, and we enjoyed a hearty meal for a relatively cheap price. There were a number of other foreigners there, both male and female, some traveling solo.

We made our way back to our room just after dark. Sylvie lay down to read, and I decided to take a “quick nap” before writing in my journal. Curled under the covers and warm, I never made it back out of bed. I barely woke up again before my alarm went off around 5am.

I was joining Wendy, Nick, and Sian the next morning on a flight to see Everest, and we were leaving before the sun would come up.