(All the photos in this post are terrible. But who wants to read a long post about travel and not see some pictures? So… sorry.)

I could feel the anxiety rising. After deplaning with a huge smile, I’d spent at least an hour trying to take care of my landing visa. When I was finally released to roam the country, I collected my ugly green suitcase, walked out of the tired airport, and saw the line of taxis. I’d already arranged for a ride to and from the airport, so I waved the taxi offers aside and looked for a driver holding a sign with my name on it.

I checked a second time to see if a driver had a sign with Intrepid Travel’s name on it.

Why had I been so determined to travel to this country without doing any research? I pulled out my trip notes. We were staying at a guest house in Kathmandu. That’s all I knew. No address. No phone number.

I looked around. It was dark – I couldn’t see stars or the moon, and it felt like the airport was the lone building for miles. More drivers came up to me, offering help in surprisingly good English.

“Intrepid Travel,” I said to one. The control in my voice was impressive, considering anxiety was coursing through my veins like cocaine. The man I was talking to, who was likely a few years younger than me, nodded.

I nearly hugged him.

Two men helped me, and 15 minutes later (it felt like longer, but anxiety makes everything feel like eternity) an old sedan pulled up.

“He didn’t think you were coming. So he left,” one of the men explained. I didn’t care. I had a way to get to wherever I was staying for the night. I climbed in the backseat on the right, behind the driver. Nepal follows the UK’s lead on driving rules.

And by that, I mean the side of the road you drive on; otherwise, the drive was similar to other Asian countries. There were scooters and bicycles skirting around slow vehicles, along with pedestrians tempting death, all in a very confined space that echoed with the cacophony of horns.

It didn’t feel like I was in a major city. The dust kicked up and was visible only because of our headlights and those of approaching traffic. I watched the street life as we bounced down roads full of potholes and broken concrete. Each time the driver slowed, I expected to be dropped off at a sagging stoop, where I’d be faced with the reality of my situation.

I was in a third-world country still rebuilding after a series of earthquakes. I was going to spend nine days with people I’d never met touring part of this country. I was probably going to have a hyper-reactive colon and only holes in the ground at my disposal.

The car took a couple slow, tight turns, then pulled into the large, walled-in complex of the Kathmandu Guest House.

Apparently it’s famous. I would’ve known that if I’d done my homework.

I was so grateful for the calm, welcoming entrance of the Guest House that I tipped the driver a $10 American bill. For the amount of relief I felt, I would’ve given him my first-born child.

The front desk had my name on their reservations list, and my relief compounded. A man who was smaller and older than me took my suitcase and led me to my room – up four flights of stairs and at the end of the hall. He hoisted my suitcase atop his head as we went up the stairs, and I apologized to him at every landing. With a smile and a laugh, he helped me to my room and left.

My roommate had claimed one bed, so I sat on the second.

I sat the Traveler’s Sit: there was no more traveling to be done. I was where I needed to be. I was in the right place. Everything was okay.

Two 17-hour layovers, three flights, multiple subway and bus rides, and one ride in a car through Kathmandu doubting my decision to come, and I was happy. Tired, in desperate need of a shower, a little hungry, but happy.

Sylvie came back while I was Sitting. We happily, and somewhat guardedly, introduced ourselves, and she told me about the group. The longer we talked the more comfortable I felt, and I was glad to meet her. I heard her mention that I would meet our guide, Pippin, before the group got together for our first excursion together.

I imagined a peppy, wild-haired, blond Brit. Maybe an Australian. Tall and sinewy and a little off, but fun. I didn’t feel the need to ask how correct my assumption was because I knew I was right.

Sylvie offered to venture out with me in a quest to find an ATM and food, but I told her to relax and keep getting ready for bed. I let her know I would be back soon, quickly checked my reflection, snorted at it, and then I bounded down the stairs and into the chilly night with the joy of Julie Andrews singing in the Austrian hills. The doorman smiled and said namaste, and I felt like a Disney princess.

–The cash-less princess. A few blocks away from the hotel I found an ATM. This machine, standing in a tiny room that was littered with hundreds of discarded receipts, snubbed me. It took a few tries for it to acknowledge my card. I started talking trash, and it finally accepted it, so I cockily punched in my PIN… only to have the machine, like a bouncer, kick me out of the transaction. My PIN was too long. I’d changed it to seven digits after my card number had been compromised, and it had never occurred to me that that could be a problem outside of the States. 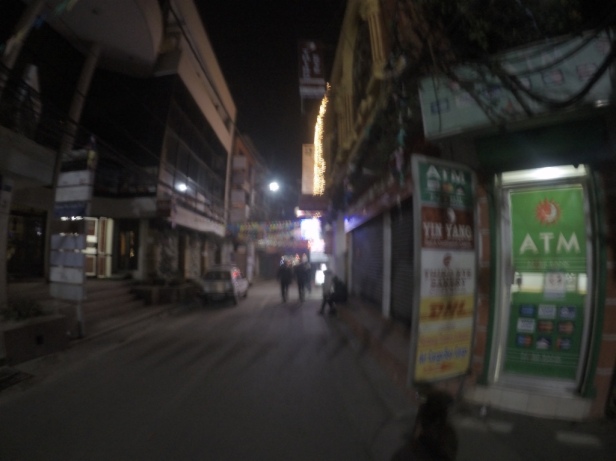 It didn’t matter. I planned to talk to Pippin the next morning and figure out how to get money then. When I got back to the room, I told Sylvie what happened, and we decided to head out early the next morning to eat breakfast, walk around, and get cash.

My meeting with Pippin was at 9:30, and our group was scheduled to meet at 10am. We were going to hit the ground running.

2 thoughts on “And then I was in Kathmandu, Nepal”