“You’re not being fired,” he said.

“We definitely want to keep you,” he said.

In January, after two years with the company and two promotions, I was promoted to Director of Marketing. I sat on the management team and advised on whatever marketing needs came up. In February I felt a shift happening, which quickly worsened, and I tried to find out what the problem was. On Monday, March 16, I was demoted and told they were getting rid of my department altogether. 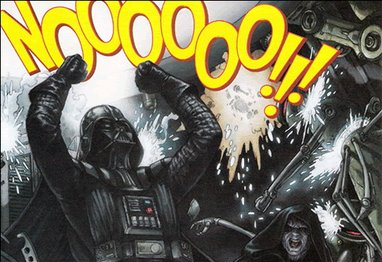 He was asking me to move from a writing-intensive, marketing-focused position I loved, one that was propelling my career forward, to a position that had nothing to do with my career path. I felt gutted.

Being demoted – or rather, having your department, of which you are the sole member, obliterated – makes you feel useless. All the time I spent studying industry magazines, doing research, compiling data, examining Excel files, organizing binders and files full of information. All the time I spent learning more about my work and figuring out ways to make it better. Everything I did as a member of the marketing department felt like it was unwanted, punched with a “YOU’RE NOT GOOD ENOUGH” stamp.

I’m good at what I do. When you can point out errors and explain why they’re objectively wrong, that must mean you know what you’re talking about, right? I do freelance work for two different agencies, and they both love me.

I think I’m good enough. Other people tell me I’m better than good enough. But my department, my job, the past two-point-three-three years of my career were going to be outsourced.

“You’re not good enough.” He didn’t, but might as well have said it.

After being demoted, your position outsourced, you want to angrily reach out to the world and proclaim your indignation to the masses. You want to write long Facebook posts, and update your LinkedIn profile, and tell anyone who will listen about the righteous wrong that’s punched you so hard in the gut you don’t know which way is up.

If you’re me, you get so angry and scared and confused you want to cry. And you do. And it’s the most frustrating thing possible, because no part of you wants to cry: every part wants to kick and scream and throw things.

I threw my business cards into the trash instead of against the wall. Didn’t help.

Blasting the company online won’t help. Talking trash won’t help. Anxiety attacks definitely didn’t help, although I got to have one of those, which was super fun.

From a business perspective, I understand. I don’t think it was the right decision, but it wasn’t mine to make. Sure, I wanted to march out the doors of the office with middle fingers high and all my files shredded. I didn’t, though.

My anger dissipated. I took that Wednesday off to get my mind right and spare my coworkers from my emotions. I’d accepted the offer to move into the other department, and as I stood over my stove cooking breakfast I felt better. The next day I was set to leave for a week-long trip to Scotland, one I’d been planning for months.

I answered my ringing phone. It was the owner. He was upset with how I’d handled the transition. “Mandy, I think it would be best if this was your last day.”

We hung up, and I stood there, stunned. I quickly called him back and apologized, but it was done. My worst fear – being let go – had come true, and anxiety erupted. Frantic breathing, crying, and shaking took over me, and I could barely stand.

Thankfully, over the course of the day I was able to calm down, go to the office and say goodbye to my coworkers. I apologized and hugged them goodbye. The support I received from family, friends, and colleagues was unbelievable, and by the end of the day I felt fine. A little nervous, but fine.

The anger came back, and I struggled with it for a few weeks. I don’t want anything to happen to the company, and I keep in touch with my former coworkers; they’re amazing people, and I’m grateful I was able to work with them.

After a month the anger finally went away again. This Saturday will mark my one-month Layoffaversary. I’m freelancing, interviewing, and feeling optimistic about the future.

Things are changing. Hopefully I won’t be unemployed for long. I am beyond good enough.

6 thoughts on “The Art of Being Demoted”