On day two of my solo trip to Jerusalem and the surrounding areas, I was standing in a street in a refugee camp in the West Bank. I’d signed up for a tour to Bethlehem, which included a visit to the Church of the Nativity, the location where they believe Jesus was born. Before we headed there, however, we were walking around Aida Refugee Camp, talking to people there, and learning about the wall and guard towers surrounding us.

Jesus, who Christians call the Prince of Peace, was born about a mile away from where I stood. Next to me was a sign memorializing a Palestinian teenager, Abed, who’d been shot there by an Israeli sniper.

My fellow tourists and I were in a rough circle around the man talking to us. Several white Westerners from Europe and North America surrounding a darker-skinned Palestinian man. Stretched in front of me was the main street to Aida. It ended abruptly in an imposing gate, the wall continuing on both sides of it.

My mind was flooded: We’d gotten the news earlier from our tour guide that rockets had been fired from Gaza, which was an hour or so southwest on the coast. Then, at the beginning of our tour of the camp, we’d been told that Aida was the most tear-gassed place in the world. In fact, during protests in Ferguson, Missouri, over the death of Michael Brown, Palestinians tweeted their support. One said, “Remember to not touch your face when teargassed or put water on it. Instead use milk or coke!”

I was not in danger. I never felt like I was in harm’s way. But I knew I was in a place where a lot of bad things happened.

So I stood there in the street with my group. I looked at our guide, then at the gate.

If I stand directly behind him, they can’t shoot him because they’d get me, too. They wouldn’t shoot an American.

It wasn’t a heroic thought. It passed through my mind as the obvious choice. If something is burning on the stove, you take it off the heat. If the man in front of you could be shot, you move so he can’t be.

There were no bullets that day. There were fighter jets, which we saw from the restaurant at lunch, from a courtyard in the Church of the Nativity, and when we were walking back to the bus from downtown Bethlehem. Those jets were en route to Gaza, I assumed, and they seemed to come from east of us.

People have asked me about my trip. Many of them, I think, expect me to glow as I talk about it. That’s how I normally am about travel, so they’re not wrong to expect an effusive answer.

But Jerusalem, Israel, Palestine — it’s not a restful place. The history of this area, from its very foundation through to its foreseeable future, is controversial and deadly. Last Tuesday, fighter jets dropped bombs on Gaza. In late July in 70 AD, Titus and the Romans attacked Jerusalem: “Five hundred Jews were crucified each day. The Mount of Olives and the craggy hills around the city were so crowded with crucifixes that there was scarcely room for any more, nor trees to make them.”

When I went to Jerusalem, the so-called Holy Land, I expected to feel connected to my religion. To see the Mount of Olives and imagine Jesus ascending to heaven from its slopes. To visit the Church of the Nativity and imagine a baby being born there over 2,000 years ago.

Instead, I encountered a conflict that is so complicated and volatile and deep-rooted that there’s no easy solution. It could be argued that you could sum up the Israeli-Palestinian conflict by asking who was there first. Even if you had that answer, though, you’re nowhere near solving anything.

There are certainly measures that should be taken to make things better, but the tensions between Israel and Palestine aren’t going to go away with the stroke of a pen or a bunch of politicians patting themselves on the back. They certainly won’t go away when people from afar grandstand and make proud proclamations. There’s nothing easy or simple or black and white here. And until people can talk without ego, nothing will change.

It should be said that while I did get a crash-course in the conflicts of the area, as well as what it’s like to be in a place where launching a rocket doesn’t mean Elon or NASA, I did enjoy my trip. It was hard, but there were also wonderful moments. Funny moments. Peaceful moments.

My religion was shoved aside on this trip, yes. Whether it was seeing the fighter jets fly over us when we were meters away from where the Prince of Peace took his first breath, or the moment when a gaggle of women, looking frantic, crushed past me in the Church of the Holy Sepulchre so they could prostrate themselves where Jesus may have been crucified (which is debatable and subject to another post).

But my faith was not. My faith in God, but also my faith in the power of hope. That hope and camaraderie is portrayed in art, which seems to be around every corner, especially in the West Bank and around the camp. 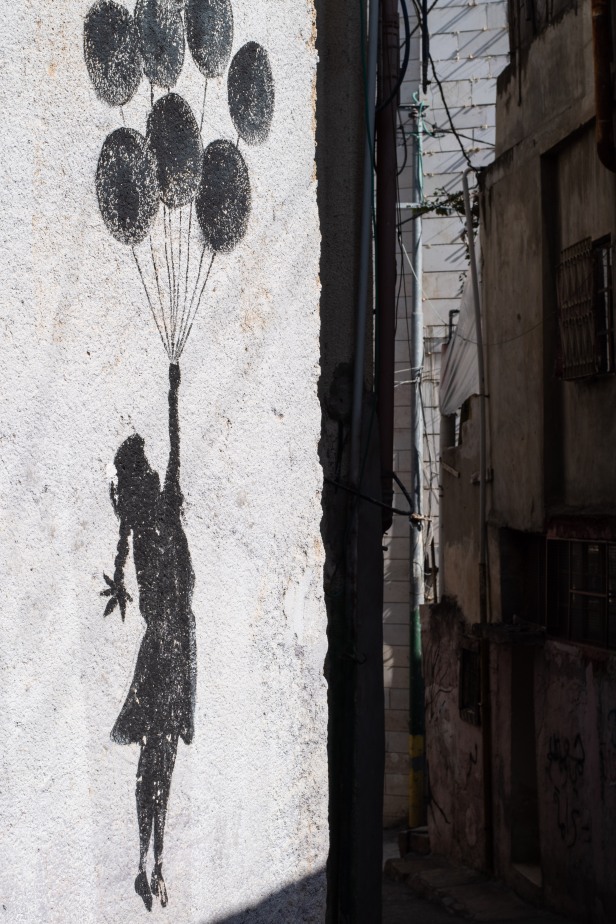 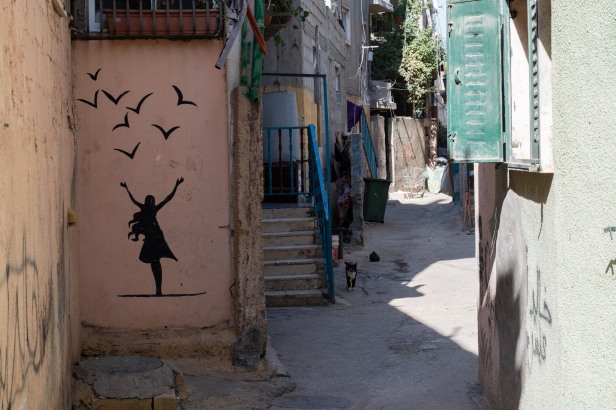 We saw crudely spray-painted hearts, maybe from kids, on the buildings in Aida Refugee Camp. 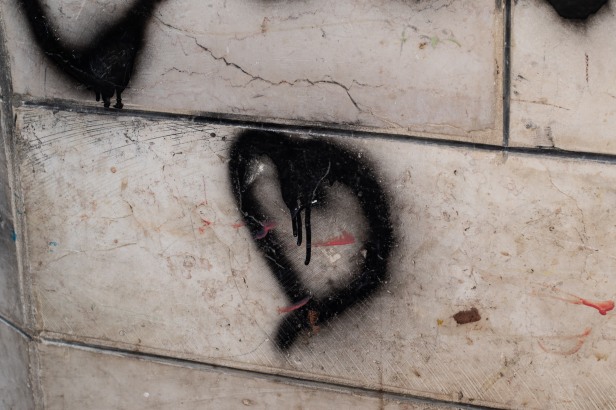 I exchanged smiles with kids and laughed at their antics, which are the same in a refugee camp, on the roof of the Old City of Jerusalem, and here in the States.

And hey, I may have met a prophet in the Old City. He was from Florida.

Normally I like to write posts, then spend weeks editing them, polishing them, making them worthy of a Pulitzer. With these, I don’t want to forget anything. So they won’t be perfect, but they’ll be my story.